BOXPHARMACY AWARDED AS A SUPERBRAND! 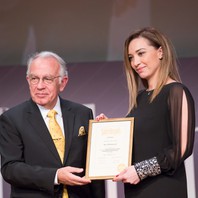 BOXPHARMACY AWARDED AS A SUPERBRAND IN GREECE

Boxpharmacy was awarded as the top e-commerce brand!

The 5th Superbrands Award in Greece was held on Monday 20 March at the Athens Concert Hall, in the presence of many eminent guests from the largest companies in Greece and the world. The Superbrands Award was awarded to Theodora Chionou SEO of Boxpharmacy.gr.

The Corporate Superbrands Greece 2016 competition is part of the global Superbrands institution and aims to highlight the top corporate names operating in Greece in 39 branches of the economy.

These are the top brands of the Greek market by industry, selected by  the Jury of Experts and after conducting a public opinion poll.

Top Superbrands were awarded at a special ceremony on March 20, 2017, which took place at the Concert Hall of Athens. Boxpharmacy was also awarded the special seal of the "Top 2016 Corporate Name in Greece", a permanent seal Excellence with the greatest prestige in the world. Boxpharmacy was awarded as a Superbrand in the e-commerce best businesses in Greece category.

Superbrands is an international organization founded in England in 1995.

Today it is represented in 91 countries around the world and has recognized more than 15,000 companies as leaders in their field.

The criteria on which companies are voted are as follows:

NEWSLETTER SUBSCRIPTION
Subscribe to our newsletter
and receive first all the latest offers and news.

Insert your email to send you password recovery instructions.

To join boxpharmacy.gr, please enter your e-mail and your desired password.